The module Slovenian Studies – Tradition and Modernity is based on the need for interdisciplinary knowledge about the core elements that underlie the Slovenian identity in the most fundamental sense. On the basis of the theme Tradition and Modernity, a range of selected module subjects, and in various complexities, aim to depict the notion of Slovenian identity – what separates us from other nations, but also what connects us together via universal elements. Though not all of the selected subjects focus on the identity, they nonetheless represent a collective interdisciplinary approach towards the theme.

The study module consists of:

The program opens with the theme of linguistic identity of Slovenian landscapes, focusing on the dialects as the original foundation of the Slovenian language, then proceeds with intertextuality and cultural memory within the framework of Slovenian literary tradition, embedded in European and world literature. We continue with music and musical creativity in Slovenia. The ethnological and folkloristic perspectives are represented by two module subjects that elucidate the folk material and spiritual culture of the Slovene nation. These two subjects represent the identity core of the module, as they investigate the most typical elements of the notion Slovenian identity: The Language of Objects – Selected Chapters from the Material Culture of Slovenians, and Folk and Literary – Folkloristic and Intertextual Aspects. General ethical, cultural and social insights are represented in the module subjects Tradition and Ethics, Tragedy in the Theatre, Culture and Society, The Role of Woman in Slovenian society and Culture and Slovenian Emigrants Between Tradition and Modernity. The novelty of the module present two further subjects: Rituality, which connects ethnology and anthropology, and Ecoculture: Studies of Animals and Nature in Folklore, Literature and Culture, which interdisciplinary links folkloristics, literary science, anthropology, and ecology.

The core of the module Slovenian Studies – Tradition and Modernity will focus on the aspects crucial for the cultural and social identity of a nation. Students will get introduced to authors, resources, materials, and processes that shape this identity. In particular, the elements, movements and processes that are fundamental for the individual topic areas of the Slovenian studies and have shaped the social and cultural memory will be addressed. This module will also take into account the contemporary needs of an educated humanist, who should first be familiar with their own cultural identity in order to expand and research others.

Additional interest of the students for the above-mentioned topics will be stimulated by their active participation in various research projects and field research, with occasional foreign visiting lecturers providing further insight. 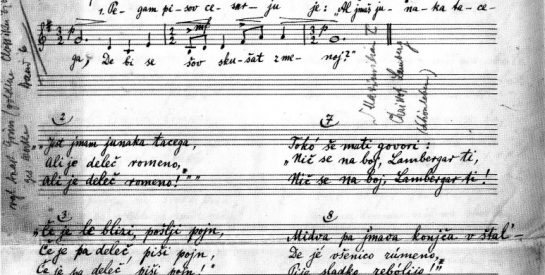 The module Slovenian Studies – Tradition and Modernity is an interdisciplinary curriculum connecting the research of various disciplines with a shared focus on the Slovenian space, culture, society and art. It integrates scientific knowledge derived from the research of Slovenian dialects, folklore, ecocriticque and zoofolkloristics, musical heritage, ritual practices, and Slovenian material culture, as well as the research of literature and intertextuality, drama and theatre, women in culture and society, and migration processes of Slovenian emigrants and their cultures.

The Language of Objects: Topics in Slovenian Material Culture

The Linguistic Identity of Slovenian Regions

Slovenian Emigrants between Tradition and the Present

The Role of Woman in Slovenian Society and Culture

Ecoculture: Studies of Animals and Nature in Folklore, Literature and Culture